While everyone's probably heard of the boy pharaoh Tutankhamun, some may not have seen the televised period drama 'Downton Abbey'. So, a few words by way of background might be useful.

First, I have to tell you that I didn't watch any of the programmes - period drama rarely rocks my boat. My wife Pat and millions of others did, however. It won several awards and starred Maggie Smith, Hugh Bonneville and Elizabeth McGovern. It's thought to be one of the most widely-watched television drama shows in the world. So, maybe you have seen it - and maybe I should be sad I missed it (although I'm not!). 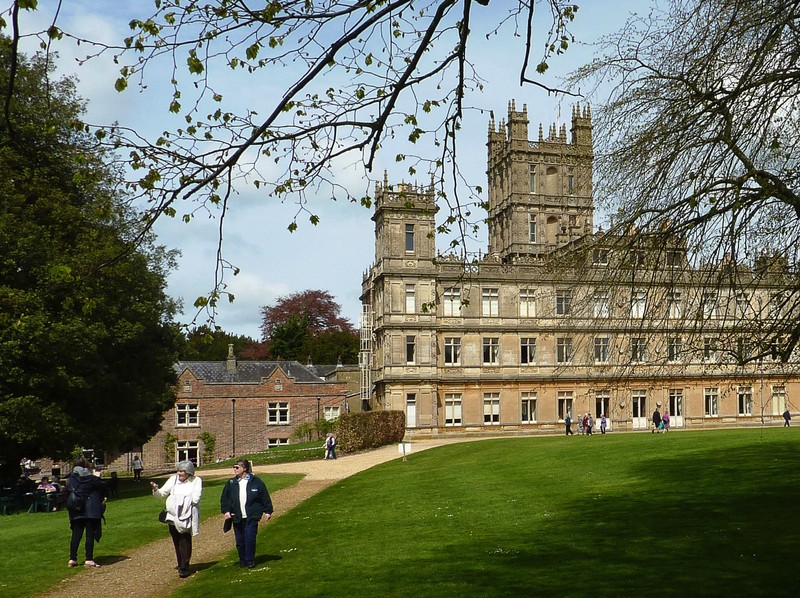 Anyhow, research tells me that the four series and Christmas Specials covered the end of the Edwardian era in 1912, through the Great War and on to the summer of 1923. The tales were set in a fictional country house somewhere in Yorkshire (the UK's largest county, in Northern England) and that the house was called 'Downton Abbey', the home of Robert and Cora Crawley, the Earl and Countess of Grantham. The drama followed the trials and tribulations of the Crawley family and their servants during the reign of King George V, starting with news of the family heir's demise aboard the Titanic. Not a bundle of laughs in my book, but each to their own...

Exterior filming for the series took place at numerous locations around the country, including Buckinghamshire, Hampshire, Kent, London, Oxfordshire, Surrey, West Sussex, and even Argyll in Scotland, but apparently not in Yorkshire, where it was all supposed to have happened.

The servants' quarters, working areas, the kitchen and some of the family's bedrooms were constructed at Ealing Studios in west London. However, the main location - for exterior shots of 'Downton Abbey' and for most of the interior filming - was Highclere Castle. It's in the county of Hampshire, south-east England, about 70 miles (116 kms) from London. 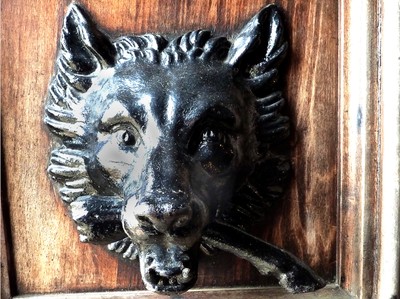 A black metal wolf holding part of a deer's leg in its mouth welcomes you! 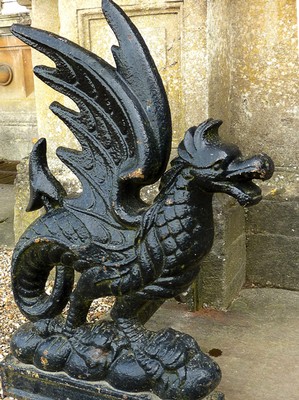 A dragon at the door:One of the boot-scrapers shaped like
wyverns – two-legged dragons, the Carnarvon family's armorial symbol. 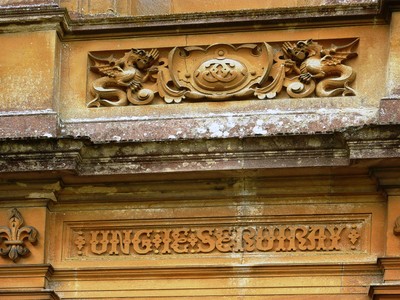 The family motto: 'Ung Ie Serviray' is ancient French for One (Only) Will I Serve

It's ideal for a pensioners' day out and, on a glorious sunny day in late-April, we joined others of a certain age on a tour to this interesting place. Yes, it's an interesting place even if one isn't particularly interested in 'Downton Abbey'! However, be warned that since acquiring television fame, it's no longer a place where you can just turn up and expect to be let in - you have to pre-book tickets for specified entry times. It was fully booked when we enquired last year and it probably is, by now, for this year!

This grand country house is set in 5,000 acres (2,000 hectares) of parkland in which the noted 18th-century landscape architect Lancelot 'Capability' Brown had a hand. Although inhabited since medieval times, what you see today is a Victorian mansion. It was designed and built in what I think is described as Jacobethan style, a mish-mash of Jacobean and Elizabethan, by Sir Charles Barry, the architect of our Houses of Parliament in London.

For the past 300 years, Highclere Castle has been the home of the Earls of Carnarvon - and herein is the clue to the Tutankhamun connection!

It was the 5th Earl of Carnarvon who in 1922, with archaeologist Howard Carter, discovered Tut's tomb in Egypt's Valley of the Kings. In Highclere's cellars, the present 8th Earl and Countess have created an exhibition with a mix of genuine artefacts that had been squirrelled away in cupboards until re-discovered in 1987 plus some 60 remarkably accurate wall paintings and replicas. Such things as an ancient mummy, a sarcophagus and even Tut's gold funerary mask have been convincingly recreated. There's even a wall with postbox-like flaps, through which you can peer to see a replica of Tutankhamun's tomb as Carter and Lord Carnarvon found it, dark, dusty and piled high with treasure. 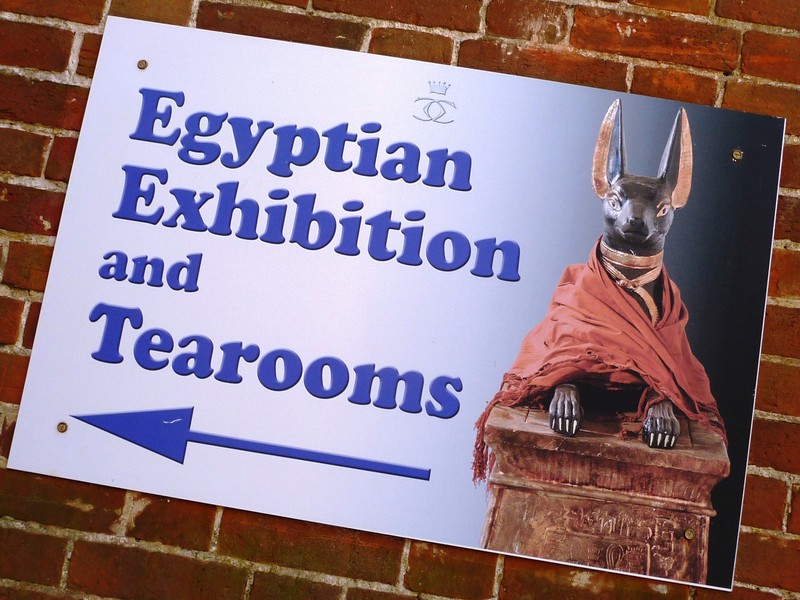 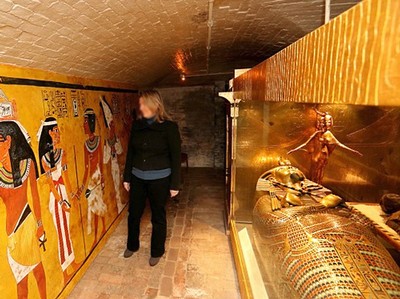 We enjoyed the house itself - the dark mahogany of The Library, the gilded panels and silk embroideries of The Music Room, the impressive vaulted ceiling of The Saloon, and a mighty Van Dyck portrait in the Dining Room of King Charles I on horseback. Pat particularly enjoyed the staircases and The Saloon, all of which had featured prominently in nearly every episode of 'Downton Abbey'. Interior photography isn't permitted (insurance problems, I guess), so please excuse the thumbnails, taken from postcards, that follow - click on them for an enlarged view. 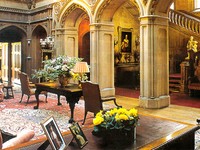 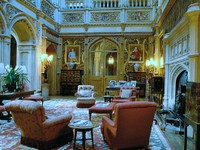 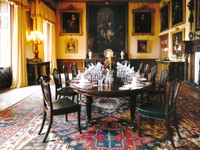 For me though, the highlights were the gardens. The Monks' Garden stands on the site of what was probably a medicinal and vegetable garden created in the 12th century when the land was owned by the Bishops of Winchester. Now planted with euphorbias, lavender, roses and an occasional tulip, it was attractive today in springtime sunshine and it will certainly be very colourful in the height of summer. 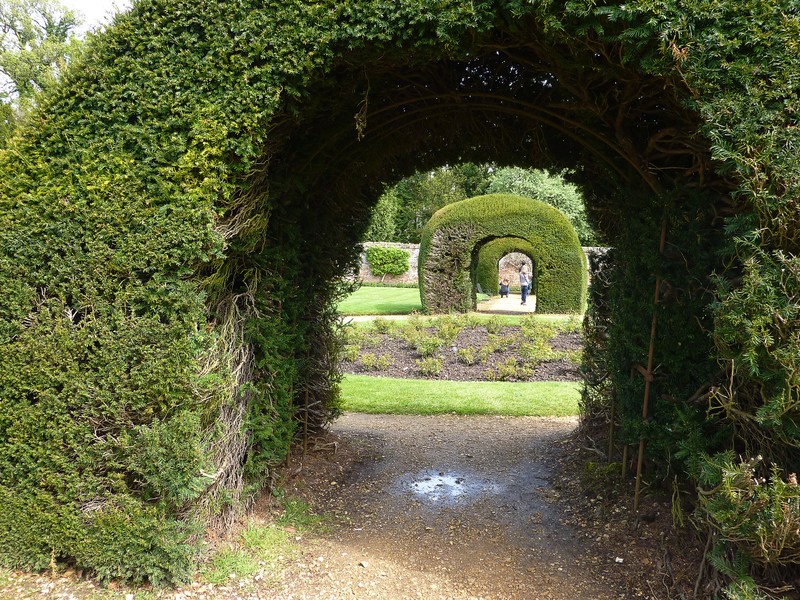 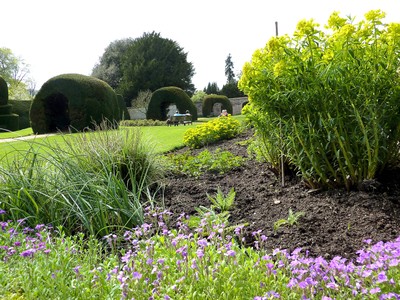 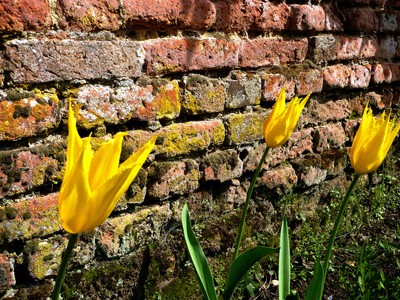 Behind a high yew hedge, there's an intriguing border, filled with plants like tulips and paeonies bearing only white flowers. 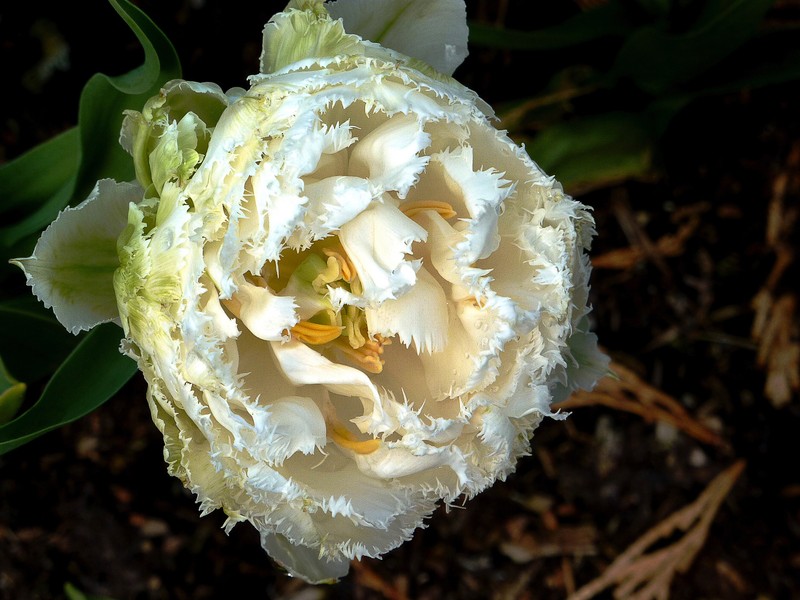 This is a tulip ...an unusual one!

A gate leads from there to a Secret Garden with lawns and winding herbaceous borders. 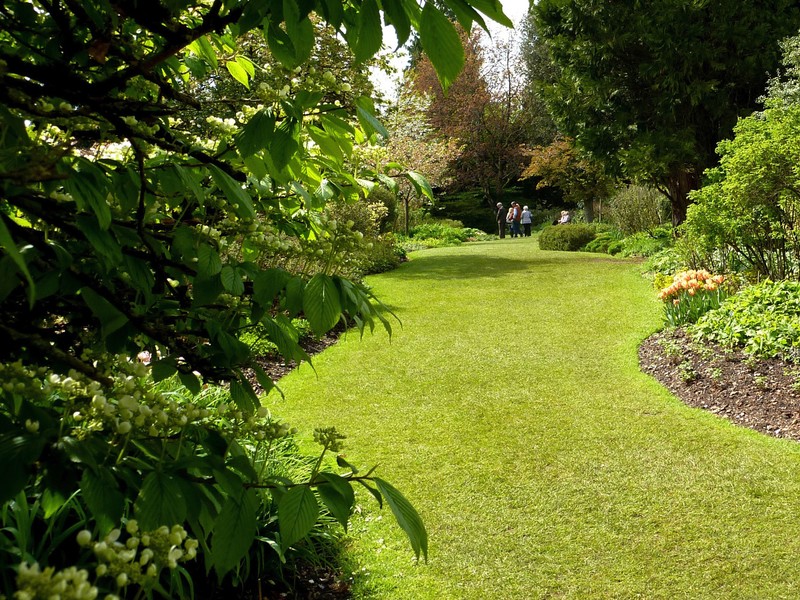 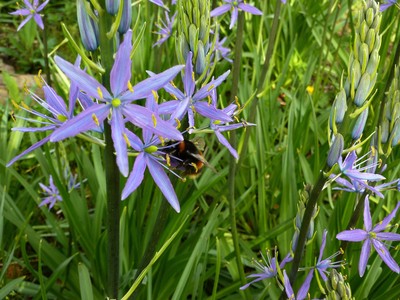 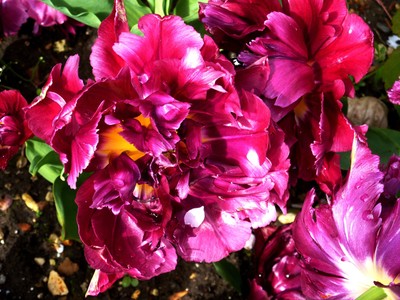 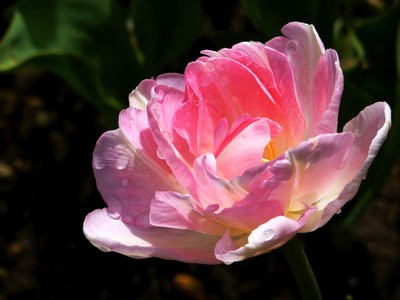 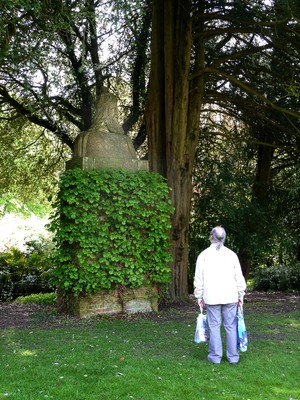 Elsewhere, extensive parkland complete with a folly or two, wildflower meadows, tree-lined walks using gifts of trees from friends and family planted around broad avenues and winding paths, spreading cedars and woodland with ancient oak trees complete the picture of what was - and continues to be - a remarkable stately home. 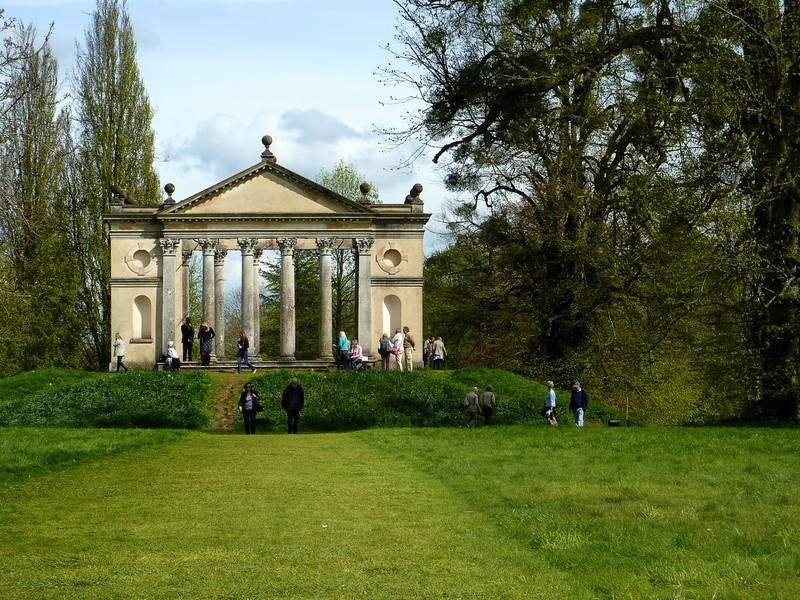 This is Jackdaws Castle, a temple-like folly erected in the 18th century. The columns are
reputed to have come from the former Devonshire House in Piccadilly, London. 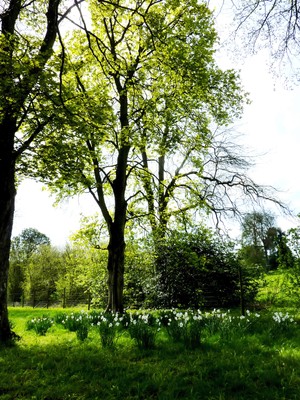 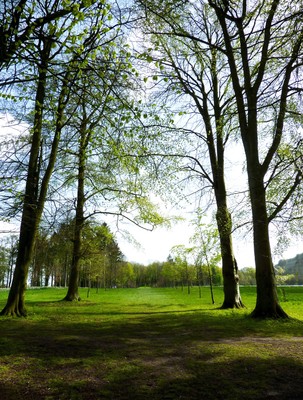 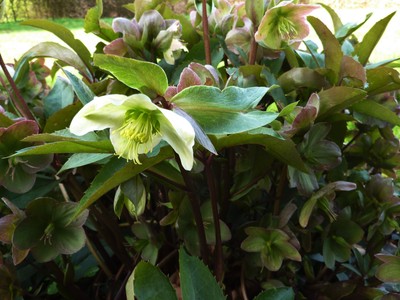 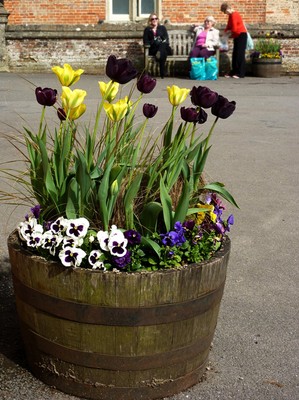 Everywhere is maintained to an exceptionally high standard. Doubtless, a fifth series of 'Downton Abbey' is on the cards...!